Beware the Reference Photo: Trusting the Eye of the Digital Age


Reference photos are by the far the most valuable tool we have as artists. They show us how a horse is actually formed, what color they are, and the details of what every muscle fiber is doing at the moment that shutter snaps...

Recently, I found this picture of Windemere Farm's "Bentley" kicking up his heels in the paddock, having a grand time! but something looked off.


If you see, his one hind leg is FULLY extended, to the extreme of it's ability without going the opposite direction that it was intended (what would be called Hyper-extension, which you *can* find in racehorses on occasion.)

But the curious thing about the picture of Bently is that while his hind leg is fully extended, his hindquarters (butt) looks to be bunching up, the stifle starting to tuck in closer to the body. Sure, Percherons only have so much range of motion and he has a certain conformation, but this just looks off... as if he was a "bad" custom of someone who didn't take into account the entire mechanics of a horse's leg from pelvis to hoof. That stifle should be further from his body at that point. It's subtle, but still doesn't look "right."

So what's going on?

In short: distortion. In the digital age we live in, cameras are more readily available available; you likely have one in your pocket right now on your cell phone. The thing about cellphones and more compact cameras is that there's not a lot of room for a lot of extra or conventional features. That's why you get the "fish-eye" effect where the edges seem stretched, so that you can fit more in the frame at a short distance (Selfies!) But there's also another problem... (watch this video!)

Also, check out Vsauce on Youtube, AWESOME videos that make you think!

The rolling shutter means that one happened on one side of the frame may not have *exactly* happened at the other side of the frame. So in the case of a millisecond event like a SWIFT, strong kick, something may not exactly add up the way it ACTUALLY happened at that point. Kinda like taking a panorama shot when someone moves, but in a much smaller frame of time.

You also can kind of see that this is what's happening with Bentley's picture because of this small area here: 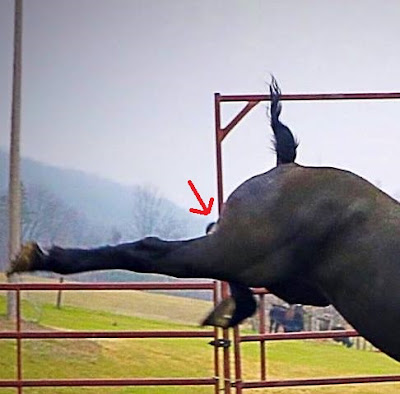 That little light spot looks exactly like the background sky, and yet it's over the other hock? That's because that other leg was moving too, and in its time, it moved into and out of view from behind his haunch. In short, his hind legs were moving VERY fast! SO fast, the camera couldn't keep up!

So the moral of the story is: not all reference pictures are created equal. Be careful using such a picture as an example of "Well, it happened in this picture!" Cell phone cameras in particular are notorious for not telling the whole, or even the correct story. That's a big reason of why I prefer a good SLR. It gets the whole story, the right time, the first time.

Now same could be said for using a picture as a reference for a color. Be aware of if the photo looks too warm (red) or cool (blue). People adjust saturation all the time (Guilty!) to make colors pop and sharpen contrast. Our eyes like to see images like this:


But in reality, it's likely not near as dramatic


So be skeptical, Question what you see if it's particularly breathtaking, consider the (camera) source or the fact it may have been edited (especially from a professional photographer).

Cindy
A look into the inner workings of Knight's Tale Studio! I, Cindy Evans, am known mostly for my unique and original custom model horses and for my superb workmanship and attention to detail. I work with Magic Sculpt two-part resin epoxy, which is a self-curing product with a long work time. It can be sculpted with in it's soft form for about 2-4 hours, hardens in 12, if ready for heavy-duty sanding, carving, and dremeling in 24. For paint, I used Heavy Body Liquetex Acrylics, Earth Pigments, Pastels, and Watercolor Pencils. I plan to use this blog to share not only my "secrets", but also my opinions and teachings about various subjects within the Model Horse Hobby.