I recently welcomed home two former customs of mine that I somehow managed to finagle out of the grip of their current owners for much less than their original cost. It's not often I can keep a custom, I usually need to sell whatever I make due to my less than ideal financial status (I'm dead broke about 99% of the time and that is no joke) and even rarer still to find and be able to purchase back a past piece. I have one or two that never left, and one that I bought back for a song.

First off, Prowler the Unicorn is home. And he is NEVER leaving again. It was a very heart wrenching situation (not to mention and fairly embarrassing snafu that happened during his sale but thankfully was sorted out). I've had this model since I was in high school and worked hard on him over the course of nearly a decade.

I never should have tried to sell him but you know me, I can't afford to keep anything I make. Thankfully when he was offered to me, I barely had enough spare cash to get him. (Thank you Breyerfest Raffle Model...) I really shouldn't have, logically I shouldn't have spared the money as I was sure to need it later (and it turns out, I did...) but sometimes, you need to say screw it to logic and find a way. This model taught me more about anatomy and sculpting than most of my customs combined. Many parts of him are 100% original... both shoulders, right haunch, tail, neck, chest (most of which I then covered by hair... derps). 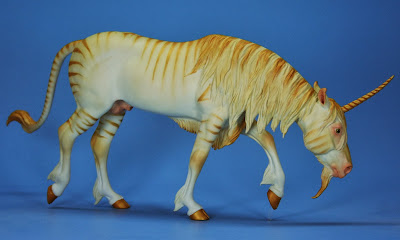 Second, the original "Velocity" somehow made it back into my hands. "Velocity Rapture" was a Lonesome Glory I customized to a racking Saddlebred stallion back when I first started customizing "drastics." He was essentially my first "big" project and one that I was incredibly proud of when I created him. I kinda knew then and DEFINITELY know now he had his flaws, but he was special to me.

Eventually I stripped him and chopped him up some more in an effort to fix him and eventually just plain gave up, selling him down the river to whoever wanted to give him a shot. 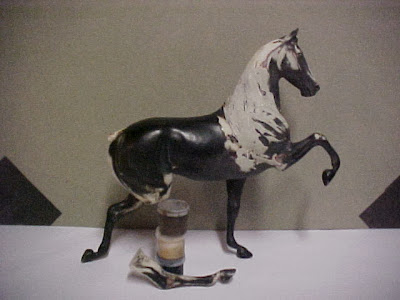 About a year ago, I tried again and created "Velocity" a vast improvement to my original idea. As you can see, my skill and growth as an artist did MUCH better justice and I also learned a lot more about Saddlebreds and what a proper, true rack should look like. 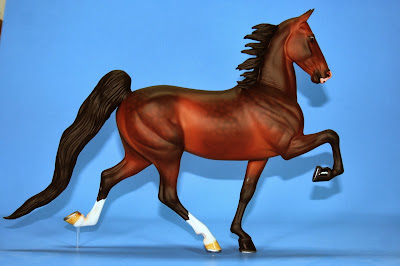 I was browsing on MH$P one night, checking out customized models (which I do from time to time to see what other folks are up to) and I found him... advertised as a "Racking Horse/Tennessee Walker" with a mane and tail that wasn't mine and stacked pads strapped on his feet, I still would recognize him anywhere: that lumpy shoulder that follows no anatomy whatsoever, a patch void of definition on the neck where I dremeled away his original mane, the landing hind foot that was not attached when I sent him off but now was in such a way I NEVER would have done. It had to be him... lo and behold, it was. But my heart sank as I saw the icon at the top of the page: 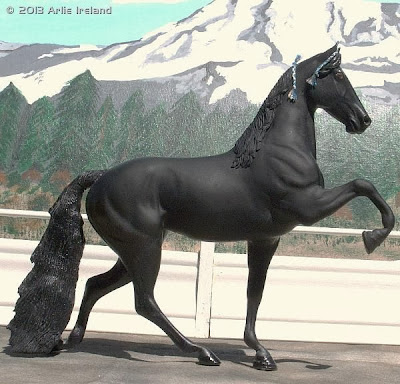 I sent off an email anyway, begging that the seller contact me if the sale didn't go through or to give my email to the new owner. She assured me she would and I heard nothing for a couple weeks. Then, out of the blue: "The buyer never paid, do you still want him?"A week later, he was back in my possession (and apparently became a "her" at some point...) It seems he found his way to a customizer of about "equal-to-me-then-skill"... the paint was laid on thick, air bubbles weren't filled in, spaghetti legs were just as I left them, etc. Someday, I plan on "fixing" him (i.e. full and total resculpt armature). Until then he rests as a testament to my skill of years past.

Cindy
A look into the inner workings of Knight's Tale Studio! I, Cindy Evans, am known mostly for my unique and original custom model horses and for my superb workmanship and attention to detail. I work with Magic Sculpt two-part resin epoxy, which is a self-curing product with a long work time. It can be sculpted with in it's soft form for about 2-4 hours, hardens in 12, if ready for heavy-duty sanding, carving, and dremeling in 24. For paint, I used Heavy Body Liquetex Acrylics, Earth Pigments, Pastels, and Watercolor Pencils. I plan to use this blog to share not only my "secrets", but also my opinions and teachings about various subjects within the Model Horse Hobby.